Altars of the Uncertain Kind 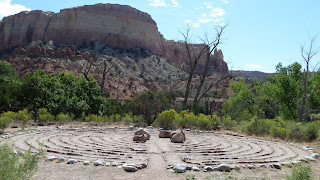 In August I spent an amazing week at the A Room of Her Own Foundation's writing retreat at Ghost Ranch in Abiquiu, New Mexico. At the ranch, the incredibly beautiful mountains and mesas that had inspired Georgia O’Keefe’s paintings watched over me. It was a week of writing, contemplation and meeting amazing women writers from all over the country. On my way home, I sat in the Albuquerque airport with Tania, who happened to be on the same flight back to Oakland. Tania and I had just realized that we had met years ago at another writer’s conference. This was just one of the many serendipitous – and for me unnerving - interchanges and intersections that had occurred that week.

As we talked about all the things that you tell someone you barely know but find you really like, we reminisced about some of our experiences at the retreat such as the intense group discussions, meditation sessions and walking the labyrinth. Women had talked over and over about spirituality and religion and the soul – all concepts that make me very uncomfortable. I told Tania all the reasons why I am not a spiritual person, that in fact I even hate the word “spiritual.” But then I had to admit that my carry-on bag was heavier than it should be because it was full of rocks and pebbles that I had collected on my walks around Ghost Ranch. That I had compulsively taken photographs of the same mountains over and over at different times of the day to record every moment of my journey. 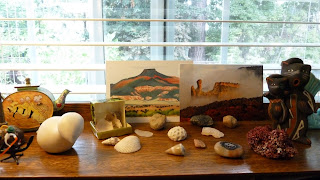 Those rocks and photographs were destined to join the shells and pieces of coral, pine cones and sage bundles, the icons and Virgin Mary’s, the tin milagros and Buddha’s that I had strewn about my house. From every place I go – and I am an obsessive traveler – I take a little piece of something to remind me of how I felt in that place or the person who gave it to me. I had to confess that I loved creating altars of all sorts – but that I was not spiritual in any way.

I also admitted that I had never wanted to write a blog because I didn’t think there were any of my thoughts that I needed to inflict upon the world, but Tania thought I should take photos of my altars and blog about them. Unsettled but intrigued, I couldn’t forget that conversation. I had to admit that something had happened at that retreat among those mountains that I didn't understand but couldn't ignore. So, because all that week I had been guided by the “spirit” of Georgia O’Keefe and the inspiration of those creative women, I did what Tania said I should do.