What can beat the All-American road trip? And what would road trippers do without rest areas along the way? 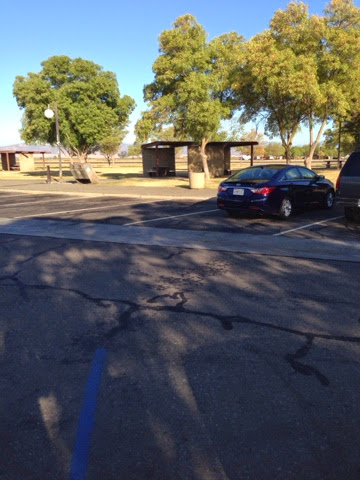 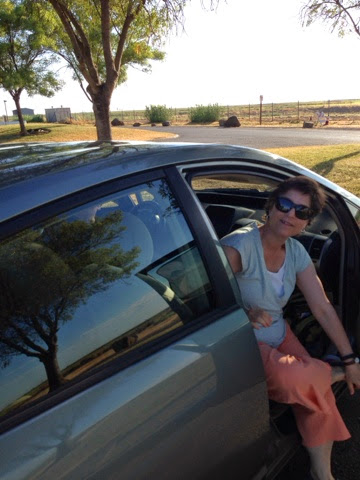 Nothing like a picnic lunch under the canopy of summer trees. 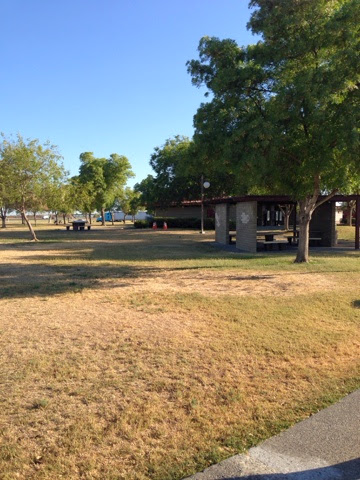 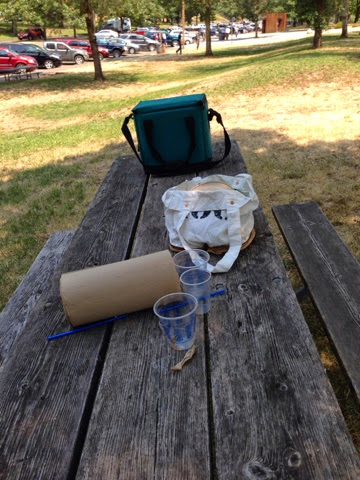 Posted by Unknown at 4:55 PM No comments: Links to this post

Discovering Ourselves: Memories of Making a Blog Mask

How delighted I was when a notice from my friend and AROHO alum Martha Andrews Donovan popped into my email inbox announcing a post for her blog, MarthaAndrews Donovan: One Writer's Excavation.  Reading this post, I felt a real burst of pride.  After all, I had been there when the seeds for that blog were planted.

At the 2013 A Room ofHer Own Foundation’s summer writing retreat, Martha and I participated in Tania Pryputniewicz’s small group titled “Transformative Blogging”.  The focus of the group was the creation of a mask that could be a physical representation of what our blogging persona would be or become.  Along with making a mask, we wrote about what we wanted from blogging, what our writing focus would be, what the mask might reveal – or not reveal - about ourselves.

Thanks to Tania I had been blogging since the 2011 AROHO retreat and had already taken another blogging class she taught, so I didn’t really expect any new insights about my writing.  I just wanted to make a mask and have fun.  As the participants paired up, I found myself with Martha.  Although we had met in 2011, we hadn’t really gotten to know each other.  Deciding to make masks together felt a bit risky. 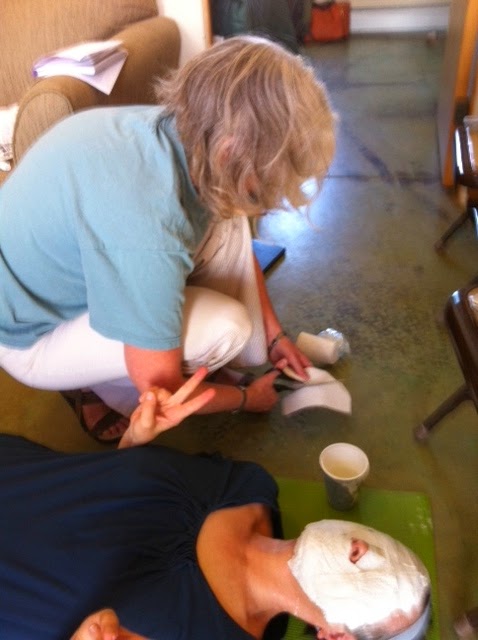 We started with me.  I lay down on my yoga mat, and Martha began putting the plaster strips on my face.  It was very cool and wet.  We had read in the instructions that the person putting on the plaster should talk to the “plasteree“ during the drying process, so before we started I asked Martha to tell me stories about her mother’s life.  Since my mouth was covered in plaster, I couldn’t interrupt her or jump in with my own stories.  All I could do was make murmuring noises to show I was listening and feeling fine.  It was wonderful listening to Martha’s calm, soothing voice tell stories of her India-born mother and missionary family.  I could picture that world of India and missionaries, of a New England family so unlike my own.  She made me want to meet those women and ask them about their experiences.

Then when my mask was done, Martha decided I should plaster her foot instead of her face.  It was such an intimate experience making that foot mask.  I’m not sure I had ever touched a relative stranger’s foot before. I loved the feel of the plaster as I smoothed it with my fingers, how delicate my movements had to be to keep from bunching up the strips.  It was almost meditative to dip the strip in water, lay it and then smooth it until no seams showed.  It was almost like caressing her foot.  I felt I was giving her something, helping to uncover a part of her in some way.  Dipping and smoothing, dipping and smoothing. I didn’t want to stop. 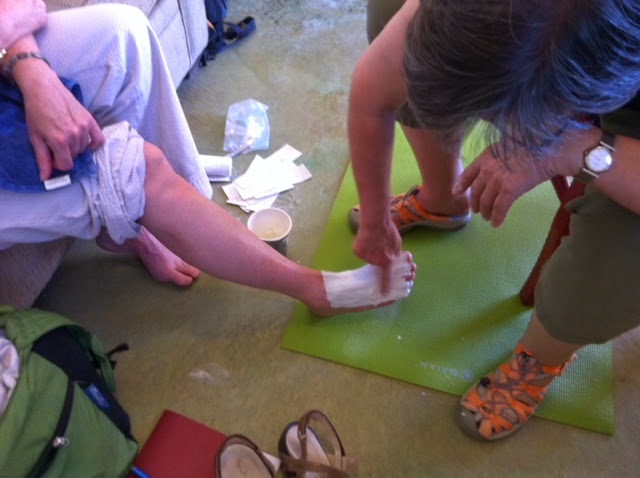 
As I had lain on the floor with the plaster drying, in my mind’s eye my mask looked exactly like me only better with smoother skin and no wrinkles. I pictured Martha’s hands smoothing the plaster over my face to create this mask.  I imagined how strong it would be once it was dry, strong and able to face the world. I pictured what I would do with my mask, how to make it represent my true self, the one I am so often afraid to unveil to the world.  I would use it not to hide behind, but to affirm. 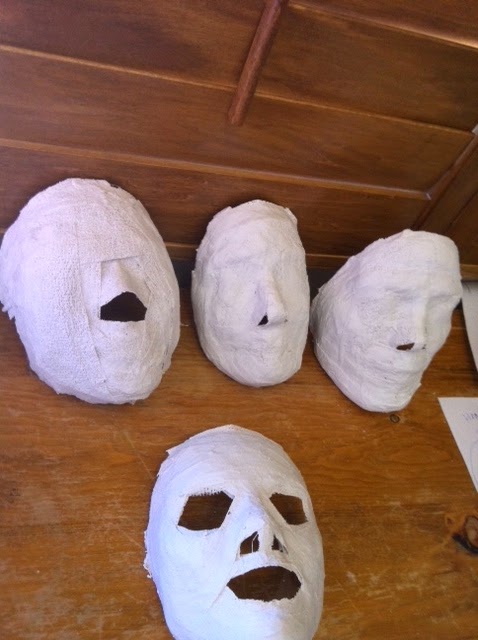 Afterwards, when I first saw my mask I was disappointed.  It didn’t look like a face at all; rather it was rough and mummy-like.  Martha apologized and asked if I wanted to change it, but I decided keep its original form.  Perhaps its roughness could tell me something.  And as I began to paint it, that coarse texture became something other than a face, it became part of the landscape around me.  The blue New Mexico sky, the clouds that rose over the desert each day, Pedernal Mountain.  I surprised myself with that painting – because I had painted a place,  not a person.  I realized it all made sense because it is places that that so often are important to my writing and to me.  Finding my place, describing places I go, building the world one word at a time as I describe where I have been or where I am right now. 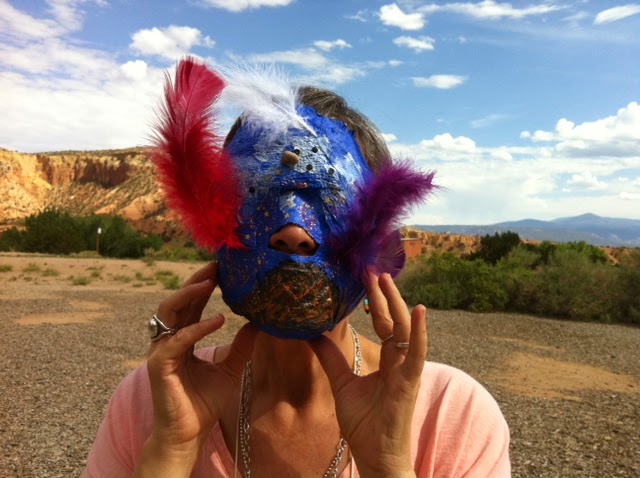 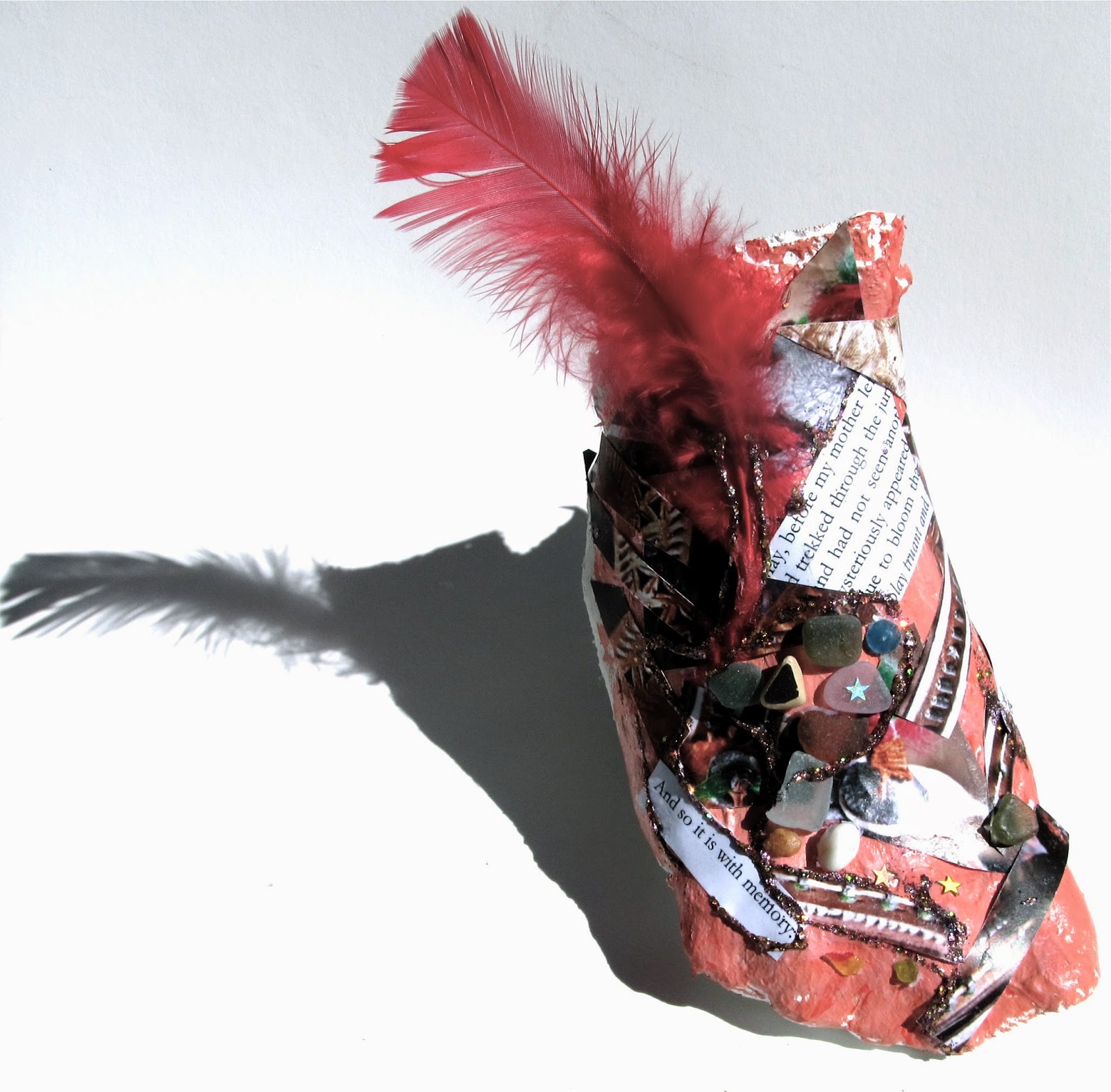 My mask is not a face, but a landscape.  And Martha’s mask isn’t a face either, but a foot.  A foot to embody the journey she is on, trying to find the way along her path.  When it came for her to decorate this mask, she covered her foot with the most amazing assortment of beads, feathers and scraps of paper with inspirational quotes. It is ornate and intricate.  And as I read her blog post about photographs of people unknown to her, or small objects found buried, I realized that her foot mask, rather odd and not quite the usual thing, was like one of those enigmatic objects that so fascinate her.  This mask could represent her impetus to uncover mysteries left by others.  Because by writing about those mysteries, Martha tries to stand in the world of those unknown people for just a while.

And so those masks we made last summer really do reveal our deepest motivations for writing, what our blogs would be, have turned out to be.  In her blog, Martha uses a Telugu proverb she learned from her mother: “By digging and digging the truth is discovered.”  Isn’t that what all writers are trying to do?  Digging down to find the truth about themselves and the world around them?  Even though I didn’t believe it at the time, making those masks was an important step in that digging process for Martha and me.

Posted by Unknown at 7:35 AM No comments: Links to this post