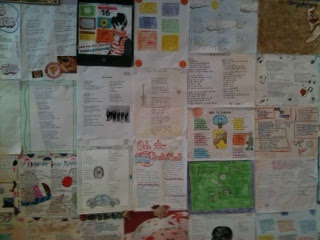 You’ve all heard it over and over:  overcrowded classrooms, decaying buildings, reduced budgets, furlough days without pay and constant teacher-bashing by political pundits and the media.  These issues weigh heavy on the shoulders of all teachers -- even a 21-year veteran like myself.  More and more these days, I have to remind myself why I chose this profession and have stayed in the classroom – with 7th and 8th graders no less – all these years.

And then, just when I start dreaming of early retirement, the sun shines through the dirty, cracked windows of my classroom, and I forget all the bureaucratic and political hoo-ha to fall in love with teaching all over again. That’s what happened when I spent the day writing odes à la Pablo Neruda with my 8th graders.

I first fell in love with odes as an English major in college when I read Keats’ “Ode to a Nightingale,” and “Ode to a Grecian Urn” with it’s famous lines “beauty is truth, truth beauty,' – that is all / Ye know on earth, and all ye need to know.”  But it wasn’t until many years later that I  thought of odes as a genre for teaching poetry in middle school – they seemed too serious and formal to attract most young people.

That was until I read Pablo Neruda’s Odes to Common Things.  Neruda’s odes to everyday items such as tomatoes or socks or salt were just the thing to interest adolescents in writing poetry.  The ode’s extravagant praise for something important in their lives appeals to the emotional exuberance of 12 and 13 year olds.  They can swoon over their first love, kiss up to their mothers or proclaim their undying devotion to their iPods or basketball.  They love it, and so do I.   They play with language in a way that makes their voices come alive on the page, and when they read their poems during our poetry reading, every one of them is a true poet.

I wish I could print some of those poems here but there are privacy issues with student work.  However I can provide you with the next best thing:  a link to the odes posted on my classroom website – http://www.msrizzo.org
You can check them out there if you want.

And of course, since I try to practice what I preach, here is my own ode "eighth grade style":

Ode to My Backpack 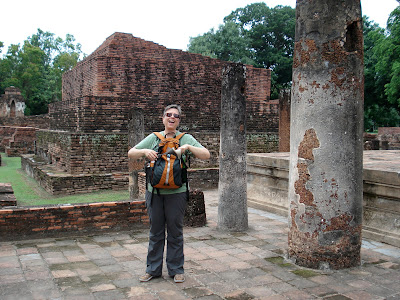 so worthy
of my praise.
Zippered one,
orange as the sun,
snug and secure
on my back.
I need you!

You are always
with me -
constant companion,
strong, expansive,
heavy or light,
your pockets
ready for my
every need.

Compared to you
suitcases are like
rocks in my hands.
Purses are as useless
as tiny boxes.
Only you, backpack
hold my life.

When we travel together
you keep me safe,
hold my memories:
evil eye from Turkey,
stones from Zanzibar,
shells from ocean waves.

I want to slip
your straps over
my shoulders,
slide into your
warm embrace.
You proclaim,
"We're on our way!"

For you I will
brush the crumbs
from your pockets,
shake the sand
from your seams.
Oh backpack,
lead me
again and again
through the world.
Posted by Unknown at 8:08 AM 2 comments: Links to this post

The Joys of Cross-Posting! 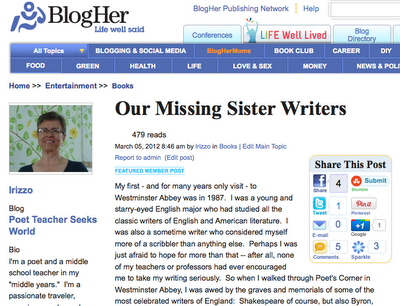 I decided to take the advice of  Tania, who taught a blogging class through Story Circle Network and created my first cross-post on BlogHer.  The post appeared today and so far it has gotten 479 reads and several comments and "likes" on Facebook.  How exciting to have my writing reach a wider audience.

Posted by Unknown at 5:42 PM No comments: Links to this post 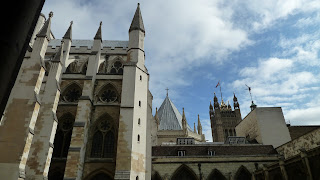 My first - and for many years only visit - to Westminster Abbey was in 1987.  I was a young and starry eyed English major who had studied all the classic writers of English and American literature.  I was also a sometime writer who considered myself more of a scribbler than anything else.  Perhaps I was just afraid to hope for more than that -- after all, none of my teachers or professors had ever encouraged me to take my writing seriously.  So when I walked through Poet's Corner in Westminster Abbey, I was awed by the graves and memorials of some of the most celebrated writers of England:  Shakespeare of course, but also Byron, Robert Browning, Chaucer and many others. 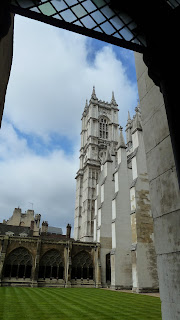 I had such fond memories of that first visit that when after 25 years I returned to London a few weeks ago, I was excited to revisit Poet's Corner once more.  I could not have been more surprised by my reaction -- anger and disappointment.  Everywhere I looked, I saw names of male writers.  Where were the women? Of course, there were the paltry few:  Elizabeth Barrett Browning's name stuck like an afterthought at the bottom of the memorial to her husband and an admittedly good-sized memorial to Mary Anne Evans who we all know as George Eliot.  Also, after much searching, I found a tiny plaque with Jane Austen's name almost completely overshadowed by the huge monuments to men that surrounded her.

Why had I not noticed this before?

I was quite the feminist firebrand in my youth, but why hadn't I felt anger over this meager recognition for women writers? Was it my own lack of confidence that made me ignore the disregard for women?  And if that is the case, what had changed to make me notice this so much on my recent visit? To my mind it's a good sign that in my middle years I still have the energy to feel resentment at this inequality. I also think that since I have a better sense of myself as a writer, I no longer question the right of any women to sit at the table of English literature, just as I no longer question my own right to call myself a writer.  Score one point for my development as a person and writer.  Mourn the fact that such a problem still exists in our day and age. 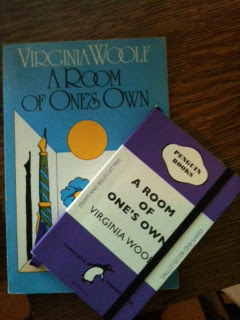 I was not allowed to take photographs among the graves of Westminster Abbey so all I have are my notes about my visit.  How appropriate that I wrote those notes in a notebook with a reproduction of the cover of Virginia Wolfe's famous essay, "A Room of One's Own."  I bought that notebook after having attended the summer writer's retreat sponsored by A Room of Her Own Foundation -- an incredible organization dedicated to nurturing women writers.  Virginia's essay describes what life would have been like for Shakespeare's sister if she had wanted to write.  Instead of flourishing like her brother, she  would have had to fight for every ounce of artistic expression she could manage.  Wolfe passionately argues for the right of all women to have a "room", a place of their own where they can create the lives they want instead of those dictated to them by a society that sees them as less worthy than men.

Near my desk I also still keep my copy of Wolfe's book from my college days with its rather "groovy" cover.  I've kept it all these years as a talisman against the forces that would make me doubt my abilities or those of any other women.  While we all know things have improved for women in the 21st century, Poet's Corner shows that we still have a long way to go before women are considered equals in the world of literature - and in the world at large.

Posted by Unknown at 2:56 PM No comments: Links to this post

Email ThisBlogThis!Share to TwitterShare to FacebookShare to Pinterest
Labels: A Room of Her Own Foundation, A Room of One's One, feminism, Poet's Corner, Virginia Wolfe, Westminster Abbey
Newer Posts Older Posts Home
Subscribe to: Posts (Atom)