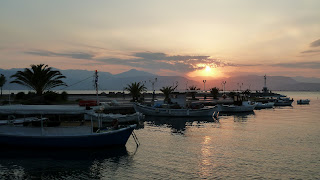 Of course I could write about postcard Greece: the pebbly beaches, the sky stretching out clear, dotted with clouds at sunset. Or the blue, blue sea, the bluest water I have ever seen, unlike any other place in the world. Or about the sun beating down hot and demanding as I walked down the small road from our tiny rented apartment to the beach. Or the food – black and green olives, anchovies and tiny whitebait fish served up crisply fried. All this is what I would expect to see – and to write about. The Greece everyone wants me to tell them about – because isn’t that what we all desire when we go on vacation? 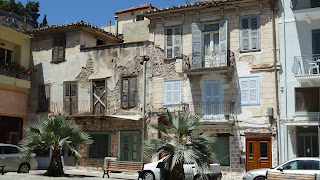 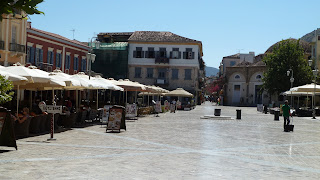 But that wasn’t the Greece that touched me most deeply.  Instead, there was the Greece I could not ignore, the one with the brave face with terror barely hidden underneath.

The Greece I saw was filled with row after row after row of empty buildings lined up on the road spreading out from Nafplio, a small town on the Peloponnese Peninsula. The lovely town square was filled not with tourists but locals.  I heard someone on the street comment that it should have been crowded in mid-June.  Instead many shops in the surrounding streets were shuttered and closed, and shopkeepers in those still open were desperate for any sale we might give them.  One salesman told us no one was coming to Greece now and certainly very few people were spending money.

The Greece I saw was the Greece of political rallies before their June 17th election with an edge to the air, a palpable uneasiness, so few smiles but instead nervousness about their future.  The streets of Athens dingy, graffiti-filled with much of the neighborhood around my hotel closed and empty with signs saying “For Rent” - but who would possibly open a business now?  And the cafes stood half empty, the roof garden of my hotel with chairs to spare when five years ago I had to fight for a table. The night our Greek friend, T. tried to find us a restaurant to eat in – one after anther gone, gone, gone – and her quiet unease at showing us what must be a daily occurrence to her, this woman whose job has been reduced to four hours a day. 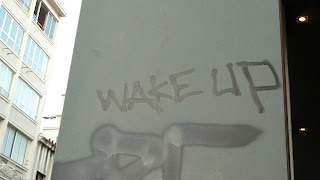 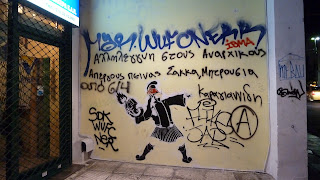 Signs of protest were splashed everywhere – raised fists and slogans painted on walls, the whole place showing peoples' anger and frustration with their broken government.   This was the Greece of high unemployment rates, especially for young people. 29.6% of young people in Greece are unemployed, according to NationMaster.com. What can they feel about Greece's future?  Where will their lives lead?

What about those who have worked their whole lives only to find their savings or pensions gone?  When D., a retired teacher, told me in his broken English, “We are very poor,” of course I thought about what I would feel, being reduced to this after giving years to teaching. His few words were filled with so much weight, leaving me with many questions - really none of my business - but I wanted to know where his teacher pension has gone, how he makes do, what this all means for education in his country.  But his English was not good enough for him to explain, and I know only a smattering of Greek.  I am left with only those few poignant words.

That was not necessarily the Greece I wanted, but it was the Greece I feared so much that I almost didn’t go - the only time I have come close to cancelling a trip abroad.  But I decided that I wanted to be a traveler and not only a tourist, to experience more than just the highlights of a country.  So I went.