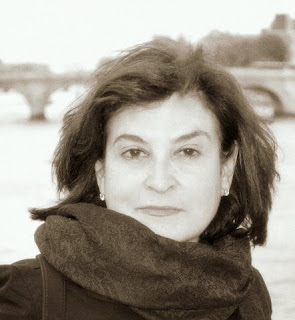 A Room of Her Own Foundation's Summer 2011 Retreat at Ghost Ranch in New Mexico brought together a group of dynamic women. Now I am honored to be working with a team whose mission is to keep the spirit of that retreat going by conducting interviews, writer to writer. I met Marlene on the bus to Ghost Ranch and then wound up staying in the room next door to her up on the mesa. We also participated in the same small group, Late Bloomers, for women of a certain age. I was surprised that we hit it off so well, since at first glance we might not appear to be friend material. Yet, with the magic of AROHO working in our favor, we have struck up a wonderful friendship. I am pleased to have the opportunity to introduce her to you here.

Thinking back to the 2011 AROHO retreat, can you tell us about an idea, exercise or conversation that had either an identifiable impact upon your writing habits or became a finished piece of writing or one in process?

There were so many incredible moments and conversations it’s really tough for me to isolate a single one but what did make a huge impact on me is the passion with which each woman approached her writing. I was moved by the observation that even the most accomplished participants still expressed some self-doubt. To me that was very refreshing!

It’s noteworthy that we all struggle with the importance of being perceived as serious writers. We each struggle to find that space and consistency for our writing but there’s no precise formula. Kate Gale’s comment – that we schedule the various responsibilities in our lives and meet our commitments yet fail to follow suit with our writing - that was especially poignant. All too often, women put others’ needs ahead of their own writing schedules as though somehow writing isn’t a legitimate use of their time.

Bhanu Kapil’s direct questioning of total strangers really influenced my own work. Her method of querying them as the means by which she could pursue her writing project encouraged me to begin a project I’d been stuck on for about two years. Until hearing Bhanu, I’d been unable to muster the nerve to approach strangers. She was a true inspiration as well!

Is there one specific moment or event at the retreat that sparked an insight or shift in how you perceive either your work or yourself as a writer?

Yes, the evening readings altered my self-perception. Reading my work helped me perceive myself more seriously and hence, as a professional writer instead of someone who’s reluctant to say, “I’m a writer,” in response to the question, “What do you do?” Before the retreat I felt like an imposter if I claimed to be a writer. Somehow, it seems that as women, we have a misperception that unless our writing appears on the New York Times bestseller list or in The New Yorker or is reviewed by Oprah, we can’t claim to be writers. It seems most of us struggle with that but - my gut feeling: it’s a much bigger issue for women.

Is there a specific woman writer who inspires/d you? If so, can you tell us something about why?

Tania Pryputniewicz was amazingly inspirational – the mere fact that she committed to attend in the face of her own doubts, that she demonstrated such a unique approach to her poetry, and that she gave such a unique and creative presentation to the entire group inspired me. She discussed the collaborative process, an approach to writing I’ve never really considered. It’s given me a new view into the creative process, almost like a child being given encouragement to draw outside of the lines.

Bridget Birdsall’s one-on-one spiritual consultation with me – something I was really suspicious of but also curious about – was great fun, not to mention that her insights were exceedingly encouraging. Her strength of character and her intuition are also reflected so honestly in her own writing. There are so many others but I’m guessing the space of this interview wouldn’t accommodate my rave reviews.

How would you describe your typical writing day?

I spend a lot of time in approach-avoidance activities, that time wasting stuff, as I try to get organized. When I was in graduate school we used to refer to that as “pencil sharpening”! I have a terrible time actually getting started on the writing process each day because I tend to take care of all my other responsibilities - phone calls, bills, whatever else distracts me. But if I don’t do that first thing then it’s very tough for me to stay focused.

Afternoon seems the best time for me, when I can spend two to four hours writing. I’ve noticed that just in the few weeks since I got home from the retreat, I’m much more committed to my writing time. It feels really good and that in itself is very reinforcing of my writing commitment. I’m certain it’s the result of embracing the concept that I really am a writer and it’s my legitimate real career.

Can you describe for us what you’re currently working on?

I’m actually working on three things, each in a different genre. I’m completing a short story collection that I’ve been working on for years entitled, The Mental Health Poster Child. It began as my memoir but has evolved as a sequel to my mother’s memoir, The Seamstress: A Memoir of Survival. After her death I rewrote and edited when Penguin Berkley agreed to publish it. In addition, I’m co-host of a culinary website and its blog, www.expendableedibles.com . Both are progressing toward an “ethnographic” sort of cookbook. My third project is a sociology book based upon interviews with baby-boom generation women. That project really draws upon my training as a serious research sociologist but incorporates my more recently honed passion for writing creative nonfiction.

Is there a specific question you’d have liked us to ask and if so, could you answer it?

Actually, yes! The question I’m surprised no one asked – one I personally asked many of women during the retreat, “What influenced you to attend the retreat?”

I’ve never been to a writers’ retreat before, only to writing workshops and conferences -courses at University of Iowa Summer Festival or University of Chicago Writers’ Studio, that sort of thing. I’d followed AROHO for many years; read about the retreats, and vacillated between wanting to apply yet worrying I’d be out of my league. After reading the bios of women who attended – a huge diversity, it was obvious that I needed to attend. I decided that, unlike workshops, what I needed most was emotional and spiritual support for my goals. That’s an often neglected component to being a productive and confident writer. At some point, writers need that kind of support and connectedness with other writers more than they need instruction in the writing process.

I’m an independent research sociologist, writer, and instructor and teach research methodology and sociology. I earned a Ph.D. and M.A. from University of Chicago. My research focuses upon changing American demographics, adoption issues, and currently, decision-making during life transitions. My writing encompasses three genres: sociology, nonfiction, and food.

I co-authored The Seamstress, my mother’s Holocaust memoir, wrote an academic book about career success plus short stories, essays, and food articles. My writing has been published in Lilith Magazine, The Chicago Tribune, University of Iowa Summer Anthology, Story Circle Journal, Long Story Short and others.